Only this morning I saw a friends Facebook post bemoaning a lost wallet and all the effort he will now have to put into having to ring around and cancel cards, reapply for various things such as driving license, not to mention any sentimental items and cash. It is a pain in the backside which can happen to anyone, that we really shouldn't be putting up with in the 21st century! Cue angry "We can put man on the moon, but... so on, so on" rant.

Well, Dutch designers Mijlo, have come up with their way of solving this inconvenience. They call it 'Where's Wallet', and are currently seeking funding on Kickstarter.

MIJLO arose from a desire to build an essential collection of well-designed goods - a collection established after a pair of successful Kickstarter campaigns: A Better Backpack andThe Everyday Watch. Following this, their focus shifted to the most essential of items: The Wallet.

Where's wallet comes in 3 designs which all incorporate a built in location device which syncs to your smartphone. This communication between wallet and smartphone allows for several features which fulfil Mijlo's two main design goals as mentioned above.

Out of Range Alert

The moment you step out of range, the wallet will beep and trigger a phone alert for swift recovery. 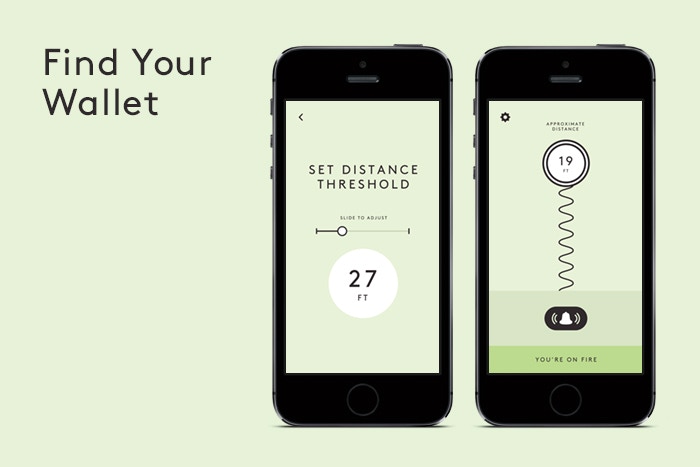 The app also provides a distance meter, which tracks your proximity to the wallet and guides you back. There is also an option to turn on audio hints to help you find it even quicker. This reminds me of that game you used to play as a kid, wandering around blindfolded searching for an item whilst someone shouts, "cold, warm, WARMER, SCOLDING HOT!". It's about time someone introduced that seamless finding technique back into our boring adult lives!

If you happen to turn off the notification range and the wallet is misplaced, you can view its last known location to retrace your steps.

This is all pretty handy stuff that should make lost wallets a thing of the past.

There are plenty of tracking devices out there on the market already, so some may already be using these with their wallets. This is the first time I can remember seeing one ready built into a wallet though.

So which is the better option? Well, a standalone device like the XYFindit or similar generally have a few more features on their app than the Where's Wallet offering currently does (although ask yourself how many of these do you actually need to find a wallet?). On the other hand though, an external device is often a lot bulkier than this built in option promises to be, so isn't going to fit in particularly well with any slim wallet aspirations you may have. The Where's Wallet offers a slim solution, but does mean you're stuck with either of the two wallet or one clutch bag designs. This is fine if you like these designs, but if not, a stand-alone device would allow you can just stick it in whatever wallet you favour. A big upside though to having it it built into the wallet is that you never really have to even think about it - you're not going to take it out and forget. So each option has it's benefits and drawbacks, and just depends on what suits your needs best.

Anyone who has spent any time with Kickstarter will know that projects are generally a bit of a mixed bag, and can range from a bloke in his shed with an idea, to a fully fledged international corporation that is looking to raise extra funds and buzz for a new product launch. Both can have their individual merits and advantages, and that's part of the fun (or occasionally, pure frustration) of kickstarter. Miljo, the designers behind Where's Wallet seem a lot closer to the latter than the former option here, and are running a pretty slick kickstarter operation. They've even come up with an interactive, 'Where's Wally' type game - do you see what they've done there!?

To find out more, or to pledge, visit the Where's Wallet Kickstarter Page, or check out their kickstarter video below.